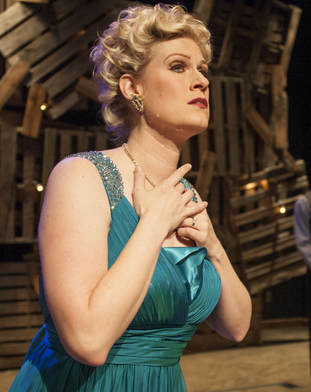 Recent solo engagements include the role of La Zia Principessa in Suor Angelica (Puccini) with Music on Site, Inc., the role of Ruth in Pirates of Penzance (Sullivan) with Opera Kansas, and Alto soloist for The Messiah (Handel) with the Bartlesville Choral Society.

In the 2019-2020 season, Lisa traveled to Spain and Portugal to perform as La Vecchia/Zita in Puccini's Gianni Schicchi in a new production produced by the American Opera Studio, Inc.  She also performed in the world premiere of Bonnie McLarty's Snow Angel with Lawrence Opera Theatre in August 2019, and in September she performed as Julia Child in the one-woman opera, Bon Appetit! (Hoiby) with the Heartland Opera Theatre, as well as the role of Ursule in Beatrice et Benedict (Berlioz) with Landlocked Opera Company in Overland Park, KS.
She also enjoyed performing covers of Fleetwood Mac's Rhiannon and Melissa Etheridge's Come to My Window and I'm the Only One with the Southeast Kansas Symphony and the J3 Band in Pittsburg, KS.

She also spent two seasons performing with the Tulsa Opera as a Filstrup Resident Artist from 2018-2020.

During the summer 2018, Lisa performed in Halifax, Nova Scotia with the Halifax Summer Opera Festival as Arnalta in their production of Monteverdi's L'incoronazione di Poppea, and the role of Anna in Cavalli's La Didone with the Haymarket Opera Summer Course, under the direction of Craig Trompeter and Drew Minter. She also spent two weeks in Eugene, OR as a member of the professional Berwick Chorus of the Oregon Bach Festival, performing Mendelssohn's Elijah and the World Premiere of Richard Danielpour's Passion of Yeshua.

Additional past performances include the role of Deianiera in Cavalli's L'Ercole Amante with the Institute for 17th Century Music - Baroque Opera Workshop in Queens, New York.  In January 2018, Lisa performed 'In si barbara sciagura' from Rossini's Semiramide with the American Opera Studio, Inc. of Kansas City for their Emerald Ball Gala.  February 2018 brought Lisa to the stage of Pittsburg State University's Bicknell Family Center for the Arts as a guest artist for PSU's production of Gilbert and Sullivan's Pirates of Penzance  in the role of Ruth.

In August 2017, her Lawrence Opera Theatre debut was as a female version of Sarastro in Mozart's Die Zauberflöte. In November 2017, Lisa returned to Heartland Opera Theatre in Joplin, MO to perform the role of Miss Todd in Menotti's The Old Maid and the Thief.  In December 2017, Lisa made another company debut in yet another originally male role as Queen Balthazar in Menotti's Amahl and the Night Visitors with Music on Site, Inc. of Wichita, KS.  Also in December 2017, she performed as a guest soloist with the Southeast Kansas Symphony for their Holiday Extravaganza.

Lisa has been a member of the professional Tulsa Opera Chorus in Tulsa, OK since the Fall 2007.   In February 2012, she made her solo debut with Tulsa Opera as Sister Lillianne in Jake Heggie's Dead Man Walking.

Other past performances include  collaboration with the Ozark Family Opera Company of Bentonville, AR where she was featured as the comic role of Ms. Denari in their World Premiere of Opera Idol! and as the Alto soloist with the Taneycomo Festival Orchestra in Beethoven's Choral Fantasy.  She has been a Resident Artist with the Ohio Light Opera in Wooster, Ohio, as well as the College Light Opera Company in Falmouth, Massachusetts, where she performed the role of Ruth in Gilbert and Sullivan's Pirates of Penzance.  She helped bring forth the first opera ever performed in Independence, KS,  Gian Carlo Menotti's The Medium with the Independence Community College at the William Inge Theatre.  Lisa has also appeared onstage with the Shawnee Mission Theatre in the Park in Shawnee, KS and the Springfield Regional Opera in Springfield, MO.

Lisa holds a Master of Music Degree in Vocal Performance as well as a Bachelor of Music Education Degree from Pittsburg State University.  She is a member of the National Association of Teachers of Singing, and a member of the music fraternity Pi Kappa Lambda.  Ms. Gerstenkorn has been an Adjunct Voice Instructor at Kansas City Community College, in Kansas City, KS and currently serves as Adjunct Voice Instructor at Pittsburg State University in Pittsburg, KS and Missouri Southern State University in Joplin, MO.  Lisa also continues to study her craft with her Voice teacher, Dr. Bill Hall of the American Opera Studio in Overland Park, KS.

Lisa is also part of the Pittsburg Community Theatre where she has performed the roles of Dominique du Monaco in Flaherty's Lucky $tiff (2010),  Glinda the Good Witch in The Wizard of Oz (2013) and most recently as Grace Farrell in Annie (2014).  She has also served as Vocal Director for the Children's Drama Workshop production of Totally Red! (2012), as well as Lucky $tiff and the huge success of Hairspray (2011) with director/choreographer Kaye Lewis of Midwest Regional Ballet.  In June 2012, Lisa had the privilege of performing with the Midwest Regional Ballet as the Queen in their production of Swan Lake in Pittsburg, KS and Miami, Oklahoma's ﻿Coleman Theatre.﻿

Lisa and her husband Brian O'Neill also devote their time to the Pittsburg/ Joplin area with their Good Times Photobooth by O'Neill for special events in the Four State area.  Lisa also teaches Private Voice lessons in Pittsburg and Joplin in her thriving Studio.  More information about her private voice lessons may be found under the Private Voice Studio link, or on her Studio Facebook page. Ms. Gerstenkorn enjoys staying busy teaching and performing, challenging  herself with new opportunities, and working to create more culture within her community and surrounding areas.